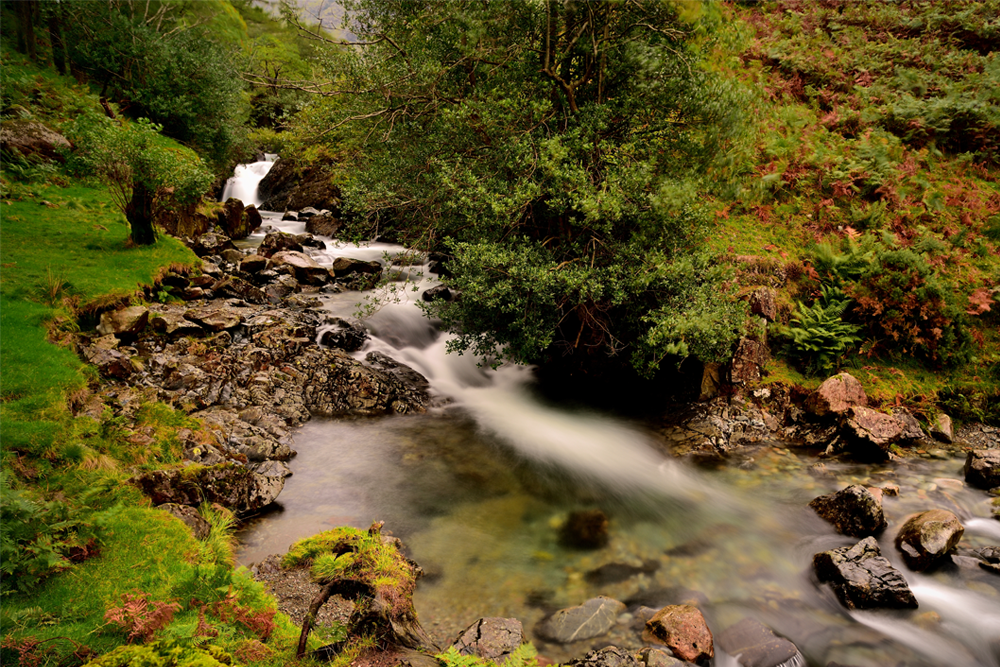 Hidden Waterfalls in the Lake District

Some are tucked away in lesser-known parts of the Lake District, like Thirlmere and Wast Water. Others are surprisingly close to popular Lake District towns but hidden off the main tourist thoroughfare. Read on to discover where to find these secret Lake District falls.

And don’t forget your photography kit, as what could be better than capturing nature’s force in places few people have been to before?

This is a true local’s force, named after a former landlord and accessed via the beer garden of one of the most remote pubs in the Lake District – the 200-year-old Wasdale Head Inn. Directions for the Wasdale Head advise not passing over the infamous Hardknott Pass, arriving via the A595 or over Ulpha Hill from the South Lakes instead.

Once in the Wasdale Valley and passing alongside the western shore of Wast Water, this scenic road stops at Wasdale Head. Here you are only about 1 ¼ hour from Langdale and a similar drive from Coniston, yet you are in the ‘wildest valley in England’. Surrounded by the famous giants of the Lake District, including England’s tallest mountain Scafell and the distinctive pyramid shaped Great Gable, it will be more than waterfalls that your lens will be directed towards when planning a trip to capture Ritson’s Force. 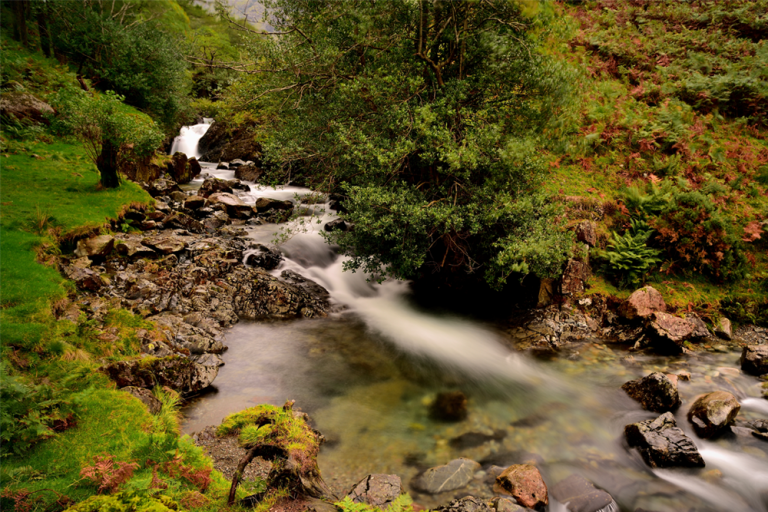 Ritson’s Force – a series of waterfalls in the hidden Mosedale valley in the wildest part of the Lake District, named after the first “World’s Biggest Liar”

Cross a stone bridge at the back of Wasdale Head beer garden, following the path up through a field and between a gap in a stone wall. At a group of trees, you pass through a wooden gate, where you’ll descend to these hidden waterfalls. Getting down to photograph the lower part of the falls will involve careful clambering down over fallen boulders and wellies are recommended for capturing the falls from standing amongst the rocks in the shallow river. The water here is crystal clear, the falls are very powerful and the fallen boulders provide points of interest in the foreground. Ritson’s Force are only 800 meters away from Wasdale Head Inn and so perfect for keen photographers. Either return to Ritson’s Bar at Wasdale Head Inn (named after local legend, the 19th century landlord Will Ritson, who held the title as the first “World’s Biggest Liar”) or you can continue this walk further on to the Mosedale Horseshoe.

From the Eden Valley or Keswick in the north Lakes, take the lesser-visited route to the western lying lakes of Buttermere, Crummock Water and Lowes Water and enjoy the most serene part of the Lake District.

Walking from the village of Buttermere, which lies between the waters of Buttermere and Crummock, enjoy a pleasant 1-hour walk to Scale Force – the tallest single-drop waterfall in the Lake District. Scale Force offers two waterfalls in one. The upper falls is an impressive narrow plume dropping 120 ft with the lower falls offering pretty wider falls.

The height of these falls and the narrow ravine does mean that visiting when the weather is calm makes for easier photography as spray and lack of light can cause challenges. That said, the fact that very few people know about this major Lake District spectacle makes a visit to get the right shot worthwhile. 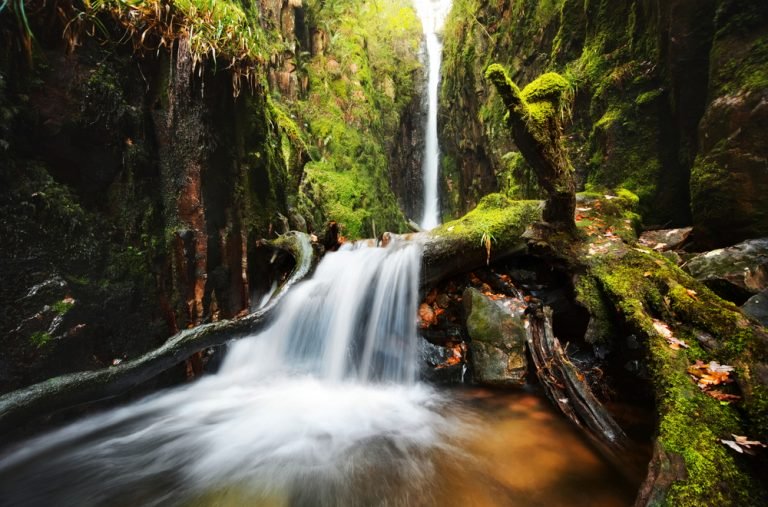 Avoid the pull of Aira Force when looking for a waterfall walk in the northern Lakes and head to Lodore Falls. Lodore Falls lie less than 4 miles outside of Keswick and has similar appeal, in being easily accessible by all the family and equally impressive.

Start your waterfall adventure by heading out on a cruise with Keswick Launch to Lodore Jetty, on the south eastern end of Derwentwater. From Kettlewell Car Park follow the easy 1-mile footpath through woodland to discover Lodore Falls.

Tumbling noisily over huge boulders, Lodore Falls is a 100ft series of waterfalls, with superb photo opportunities that are not restricted by viewing platforms and safety railings, as Aira Force is. The falls make for especially good photography following heavy rainfall where the Watendlath Beck crashes over the huge boulders, with crystal clear water pooling between.

Lodore Falls have long been a major Lake District spectacle. The mesmerising experience of this Lake District waterfall was perfectly captured by Robert Southey in his 1823 onomatopoeia poem titled ‘The Cataract of Lodore’, in which the poet describes the fall ‘glittering and frittering, gathering and feathering, whitening and brightening’. You must visit to experience for yourself. 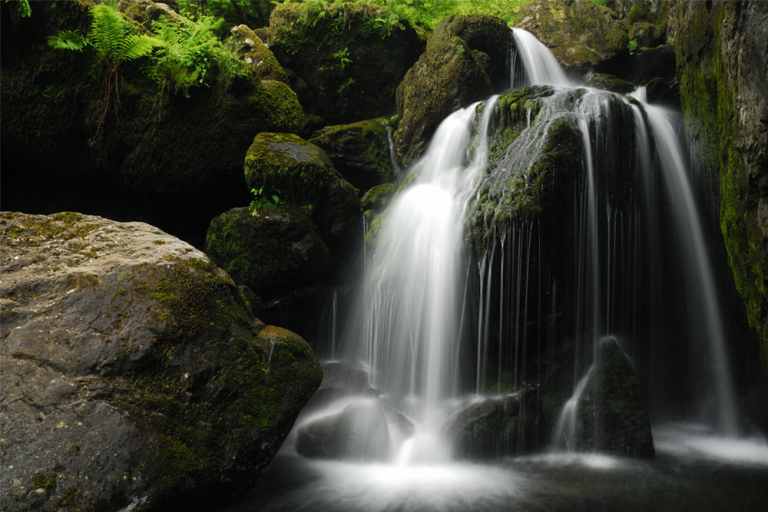 Another alternative waterfall walk in the north Lakes is Dob Gill waterfall, tumbling into the lesser-known Thirlmere Reservoir.

Thirlmere Reservoir lies below the ridge of Helvellyn to the east and Raven Crag to the west. From here, Dobb Gill tumbles out of Harrop Tarn down a wide rocky ravine, giving rise to a series of waterfalls and plunge pools. The upper pools are separated by the lower pools with beautifully clear plunge pools that make for great spots for setting the tripod up.

Park at Steel End Car Park, just outside Wythburn off the A591, which passes down the eastern shore of Thirlmere. The signposted walk to Harrop Tarn takes you steeply through woodland where you arrive at the secret falls after only 1 mile. Glimpses through the trees of the falls as you ascend add to the excitement. The walk is not too challenging, and kids will enjoy it was much as keen photographers.

This walk can be continued out of the woodland and on to the fell tops for another 1.5 miles to Blea Tarn, another wonderful photography opportunity. 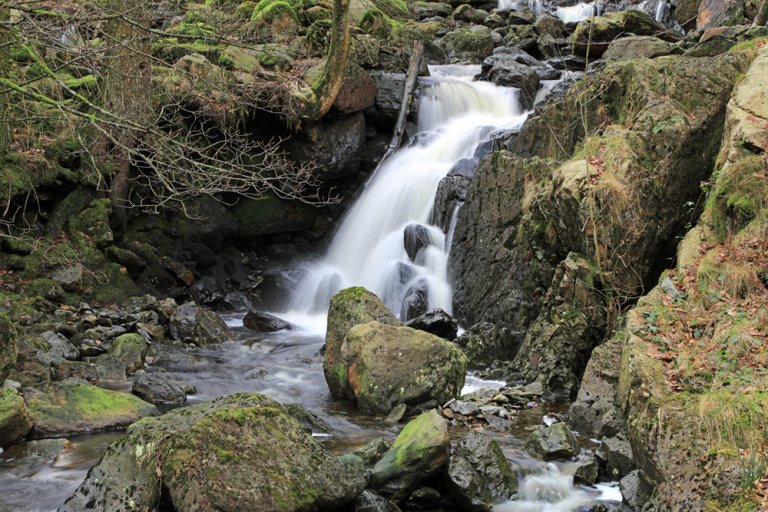 Tarn Hows, Coniston, is one of the most iconic easy-access walks in the Lake District. That said, choose an alternative trail to the circular route around the tarns, and walk to Tom Ghyll waterfalls instead.  A mile outside of Coniston, park at the Glen Mary Bridge car park, off the A593. Given the picturesque name of Glen Mary by John Ruskin, after his wife, you have an indication of the beauty up ahead. From this car park, follow the signposted route along the tumbling, and less romantic-named Tom Gill stream.  After only 10-15 minutes you reach the first waterfall with a second flurry of a more impressive fall a little further along. This route promptly brings you out at Tarn Hows, where you can join the circular walk around the picturesque tarns. Arrive in the evening, once the crowds have gone, and enjoy another photography opportunity where the still tarn waters appear like mirrors, magically reflecting the surrounding coppices in this dream-like landscape. 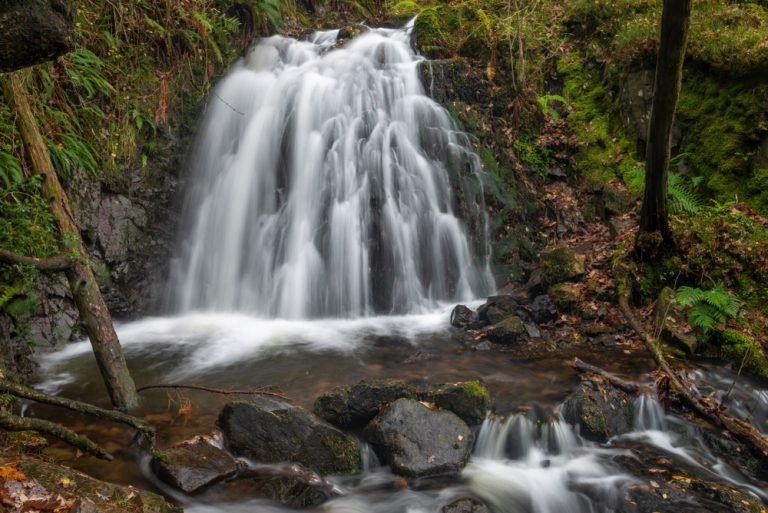 As the only waterfall within easy walking distance of a Lakeland town centre, it’s unsurprising that the various falls of Stock Ghyll Force in Ambleside have been a popular attraction for over 100 years. In fact, Victorian visitors paid at a turnstile view these famous falls, enjoying them from a viewing platform. The beauty of the falls remains the same today and the easy access and close proximity of the falls to Ambleside is a draw for many photographers not keen on lugging lots of kit around the fells. 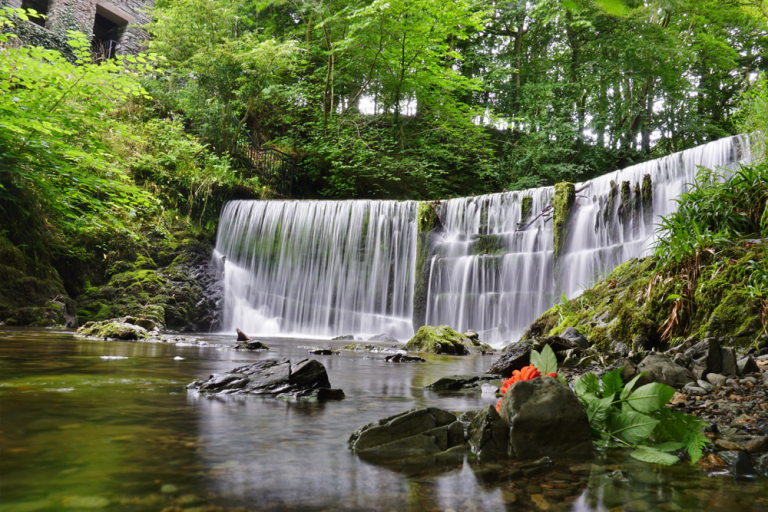