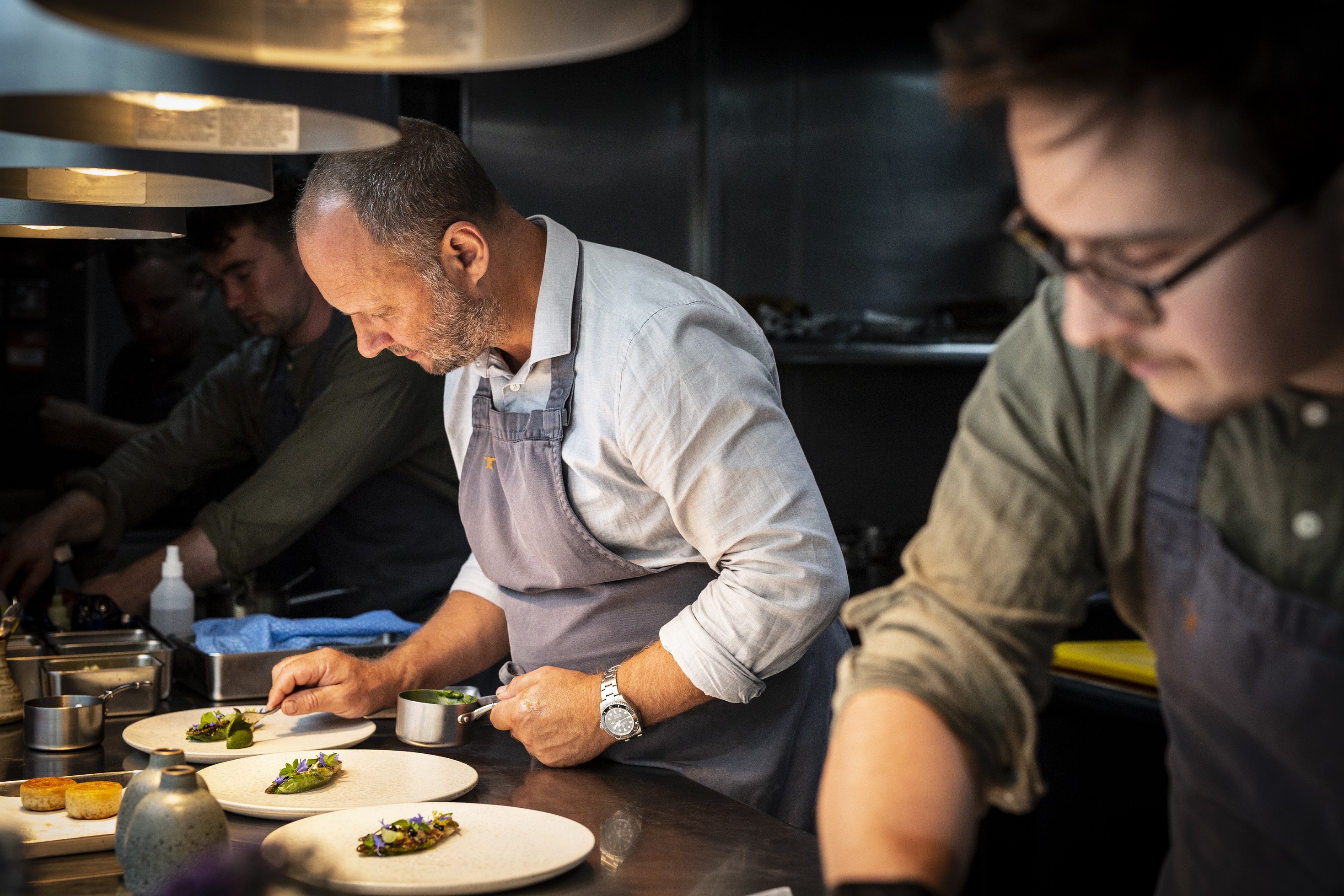 We were fortunate enough to catch up with Simon Rogan earlier this summer to find out a little about the award-winning chef and pioneer of the farm-to-table movement. Simon’s restaurants in the UK and Hong Kong currently hold four Michelin stars between them, and in 2021, L’Enclume and Roganic Hong Kong were both awarded the newly introduced Michelin Green Star, making Simon the only chef globally to have received a green star on two continents.

I’m fortunate to work with an incredibly dedicated team, which makes being a chef the best job in the world.

I’ve always tried to push boundaries and be the best that I can be, which drives me forward.

Inventing dishes with the freshest ingredients from my own farm and creating a unique and unforgettable experience for our guests is incredibly rewarding. That’s always motivated me and helped me continue to develop as a chef.

I grew up in Southampton. Both my mum and dad worked really long hours, so to help out, I used to cook the family meals. I started cooking at home from about the age of 12, and it went from there.

My dad worked at a wholesale fruit and veg market, and that came with a few perks, including being able to take home whatever he wanted at the end of the day. Some of the stuff he brought back at the time was pretty exotic. Finding out what you could do with those more unusual ingredients made me more and more interested in food.

When did you start working in a commercial kitchen?

At the age of 15, I decided to go to college because I knew I wanted to work with food. By the time I’d turned 17, I managed to get an apprenticeship at the Rhinefield House Hotel in the New Forest, working under Paul Norman, a former head chef at the Savoy. This opportunity kick-started my career and gave me a sound understanding of classical cooking.

A few years later, I went up to London and worked under some serious chefs, including the likes of Jean-Christophe Novelli, Marco Pierre White and John Burton-Race, who each gave me a crash course in modern cooking techniques.

How did you end up in Cumbria?

Moving to Cumbria came about by accident really, I’d been looking for somewhere to buy in the southeast but couldn’t find anywhere. I’d always wanted to work for myself and start my own restaurant. I guess it’s what any chef wants to achieve, and I wasn’t going to be able to do that working for someone else.

In 2002, a property agent got in touch out of the blue about a building in the Lakes. I went up to have a look and instantly fell in love with what I saw. I put an offer on the train back to London, much to the surprise of my partner Penny. The building in question was a 13th century former Blacksmith’s forge in the medieval village of Cartmel, now home to L’Enclume.

So, nearly 20 years ago, we sold everything we had, car, stereo, furniture and our house, to make the huge move to the Lakes. I’m not going to claim it was an easy move. Food in Cumbria at the time was very different, and customers expected hearty platefuls rather than what I had in mind. We had to let out the rooms above the restaurant to make ends meet, but over time, we made the connection between the landscape around us and the restaurant. As a result, people began to understand what we were trying to do. Slowly but surely, we began building a name for ourselves and our aim of delivering a truly traceable dining experience.

How do you like to spend your time off?

It’s been full-on since we opened L’Enclume, but it’s been worth it. Cumbria is my home now; I live just up the road from the restaurant in a little village nearby.

I enjoy cycling as there are some great rides in Cumbria, with some pretty big hills – Tow Top can make life interesting if you fancy a steep 20% climb, with a few hairpin bends thrown in for good luck! Thankfully, there are some flat rides too, like those in the Lyth and Winster valleys and the marsh causeways around Heversham and Meathop.

The good thing about being in the Lakes is that you can step out of your front door and be in an amazing landscape pretty much instantly. There are lots of great walks to enjoy, and if you know what you’re doing, places to forage too, Colwith Force is a great little walk near Elterwater. We’re lucky we’ve got the coast too, there are some fantastic beaches like Silecroft and Drigg, which most people haven’t heard of.

We’ve also got an ever-growing number of cafes and restaurants to explore too, like Plumgarths near Kendal, home to Lovingly Artisan Bakery and the Wagtail Kitchen; and Unsworth’s Yard in Cartmel, where you can find Cartmel Cheeses and Unsworth’s Brewery. You’ve also got The Lakes Distillery at Setmurthy near Bassenthwaite; The Black Bull and Three Hares Deli in Sedbergh, all of which are helping to put Cumbria on the food map. 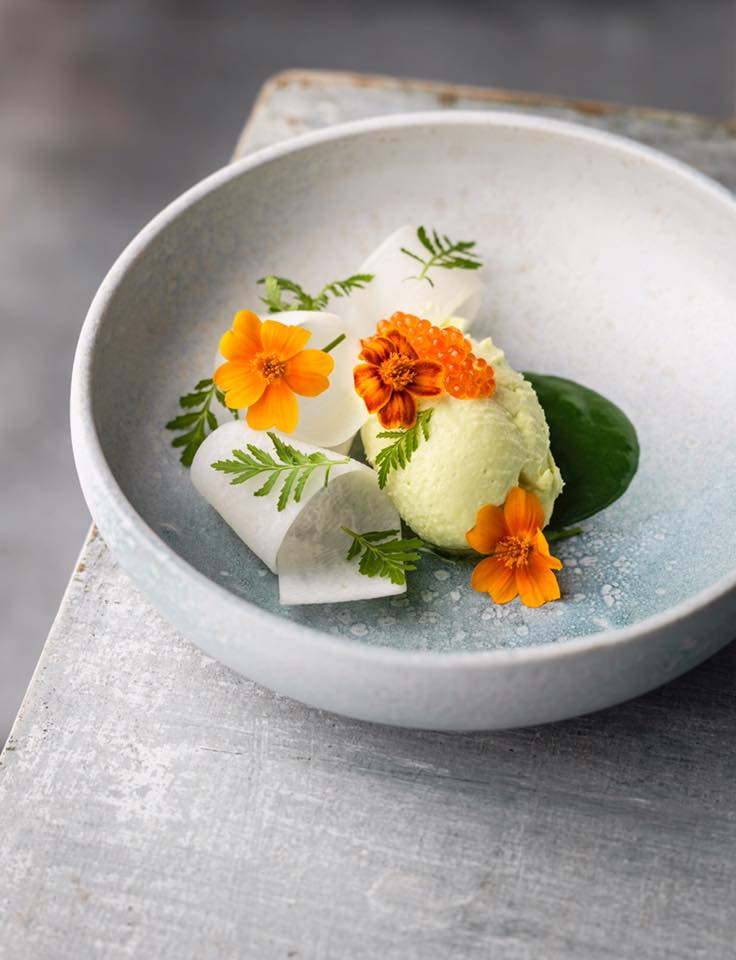